Diabetes: The Ins and Outs 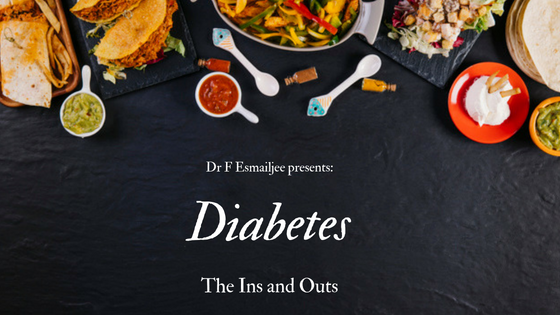 Diabetes Mellitus is a disease which occurs when the body cannot regulate blood glucose, also known as sugar, within the bloodstream.

The hormone Insulin, produced in the pancreas, is responsible for regulating blood glucose. It does this by transporting glucose to cells of the body where it is used for energy. When your body is not making enough insulin or insulin is not being used well, diabetes occurs.

This type of Diabetes occurs in patients younger than 30 years. The Beta cells of the pancreas are destroyed in an auto-immune reaction (where the body attacks itself). The patient usually is thin and has no associated obesity.

This type of Diabetes, previously known as adult-onset diabetes but is now commonly found in children as well. This type of diabetes is associated with diet and lifestyle choices as usually has a later onset in life. However, with childhood obesity being on the rise this is no longer valid.

Type II diabetes occurs when glucose levels increase after high carb loads and take longer to return to normal due to increase in fat and decreased muscle mass. With type II diabetes insulin levels are initially quite high in the early part of the disease (insulin resistance phase). Insulin production decreases later, when the body can no longer compensate for insulin resistance, which in turn causes hyperglycaemia (high blood sugar).

These are the most common symptoms of diabetes. Uncontrolled diabetes can lead to further complications and symptoms.

A good diet is the most important place to start to controlling diabetes. Foods with a high glycaemic index are a BIG NO!

Fish oils: Similar to a class of drugs called thiazolidiones which are used in diabetes management

Lipoic Acid: Particularly beneficial for the neuropathies associated with diabetes

Zinc and Selenium: Decrease oxidative stress and kidney injury due to diabetes

Homeopathy helps as it looks at the individual as a whole and the symptoms which the patient is currently experiencing in order to prescribe the indicated remedy.